Pricing a SaaS product is not an exact science. There exists no magic set of formulas that will tell you how many pricing plans you need and at which price.

I will try to give some tools & ideas that we’re using internally when setting prices for SaaS products.

The first concept that is very useful when you think about pricing is the relationship between cost, price & value. You can easily put these 3 values on an axis:

For any healthy business you should have cost < price < value.

Furthermore you have 2 gaps:

Basically you need to maximise both margins in such a way that you have the maximum possible profit and your customer has the maximum value.

A more realistic spreading of cost, price & value is:

The idea is: You try to give as much value as possible!

When the perceived value of your solution is less than the price you’re asking, then you won’t be able to sell to many clients.

We repeat as it’s so important: a SaaS industry standard is that you try to provide 10 times the value of what your customer has to pay for the solution. If you can not prove to your customer that the value of your offer is a multitude (aim for 10 times) of the asking price, then you probably need to go back to the drawing board and improve your offer or decrease the price.

If your software can eliminate the labour cost of 40 hours of manual work a month (at an hourly rate of €25) AND your potential customer can easily understand & confirm this benefit, then you can perfectly ask for €100/month (but price it €99). 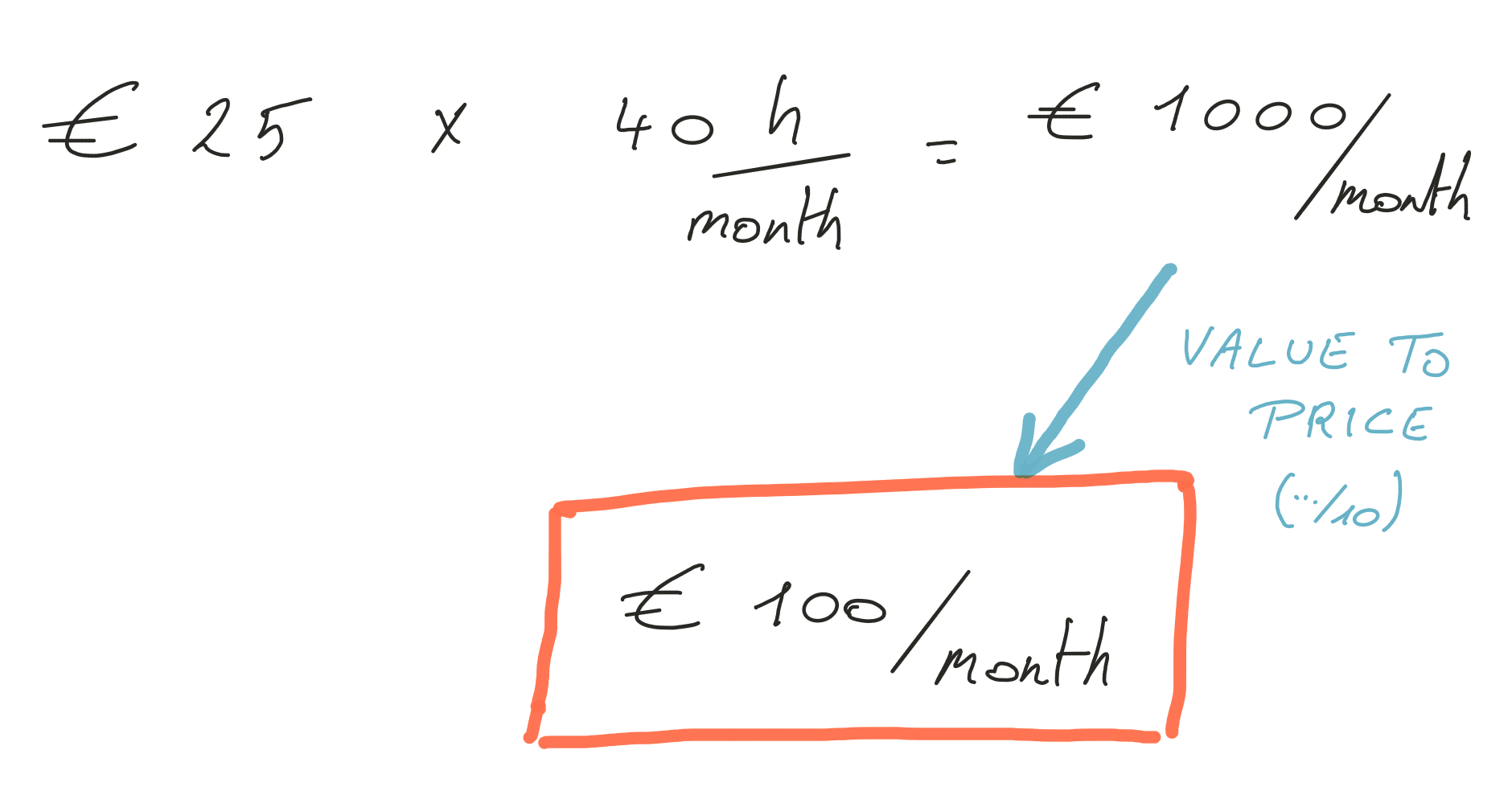 If the cost to build, market & sell your solution is higher than your price, than this is obviously a guarantee for failure!

It can be a strategy to enter a new market with existing competition, but at some point your price has to be higher than the cost!

You can start with a single package, but as you move forward you can begin to introduce different packages at different price points. Below we shortly discuss what you can take into account when creating different packages. We will use the concept of price axes.

The most obvious way to create different packages is by adding more features to the more expensive packages:

Evernote (note taking app/platform) is a good example of this pricing strategy. At the time of writing they have 3 plans:

The main differentiator between the different plans are the available features: 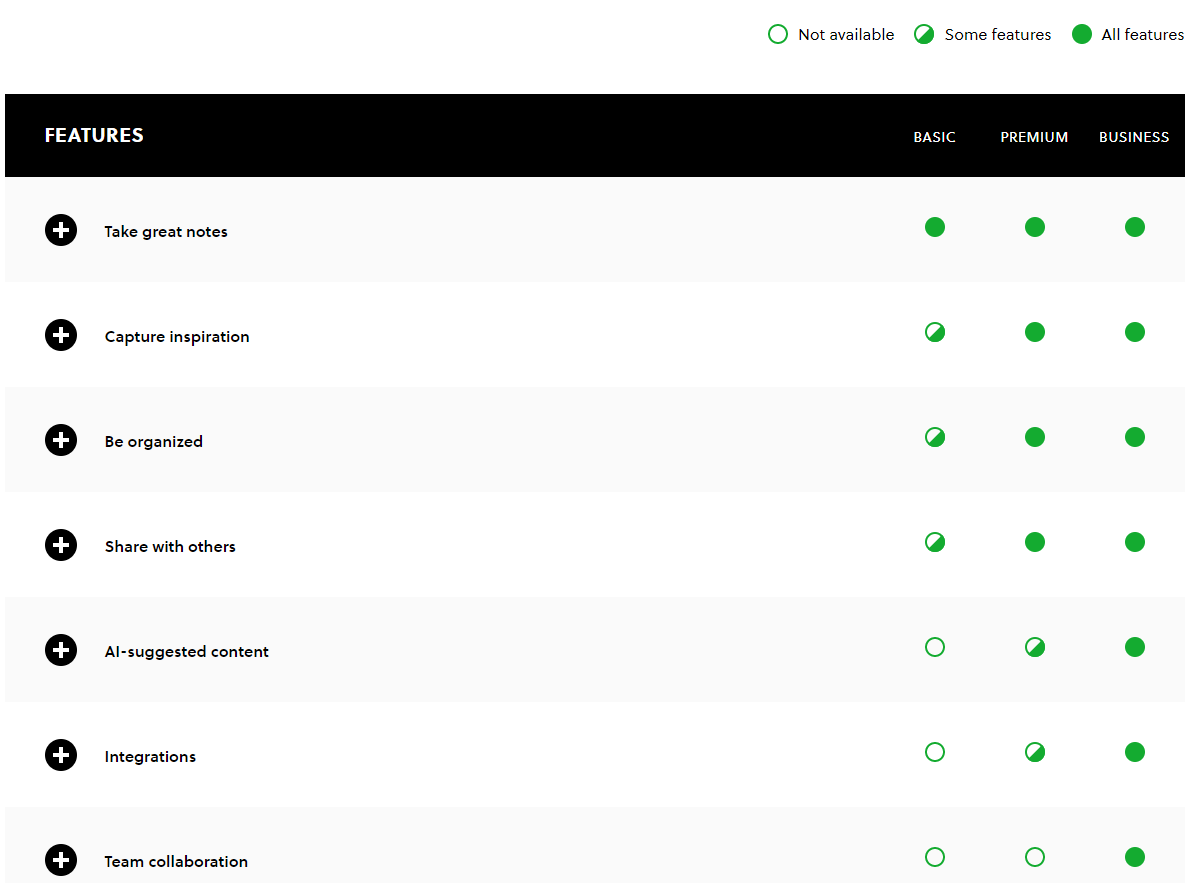 After feature based packaging, is the “number of users” criterium one of the most used differentiator in price setting.

You can restrict the most basic package with some quantity based limitations and gradually scale up these quantities for higher plans.

These limitations are specific for each problem domain, but some examples are:

It really gets interesting when you start to combine different axes into a 2, 3 or multi dimensional pricing space. Of course you also don’t want to make your pricing scheme too complex, so really think carefully about how far you go!

When you use 2 axes for your pricing, you will have a 2 dimensional pricing model. The combination we see most often is features in combination with number of users: 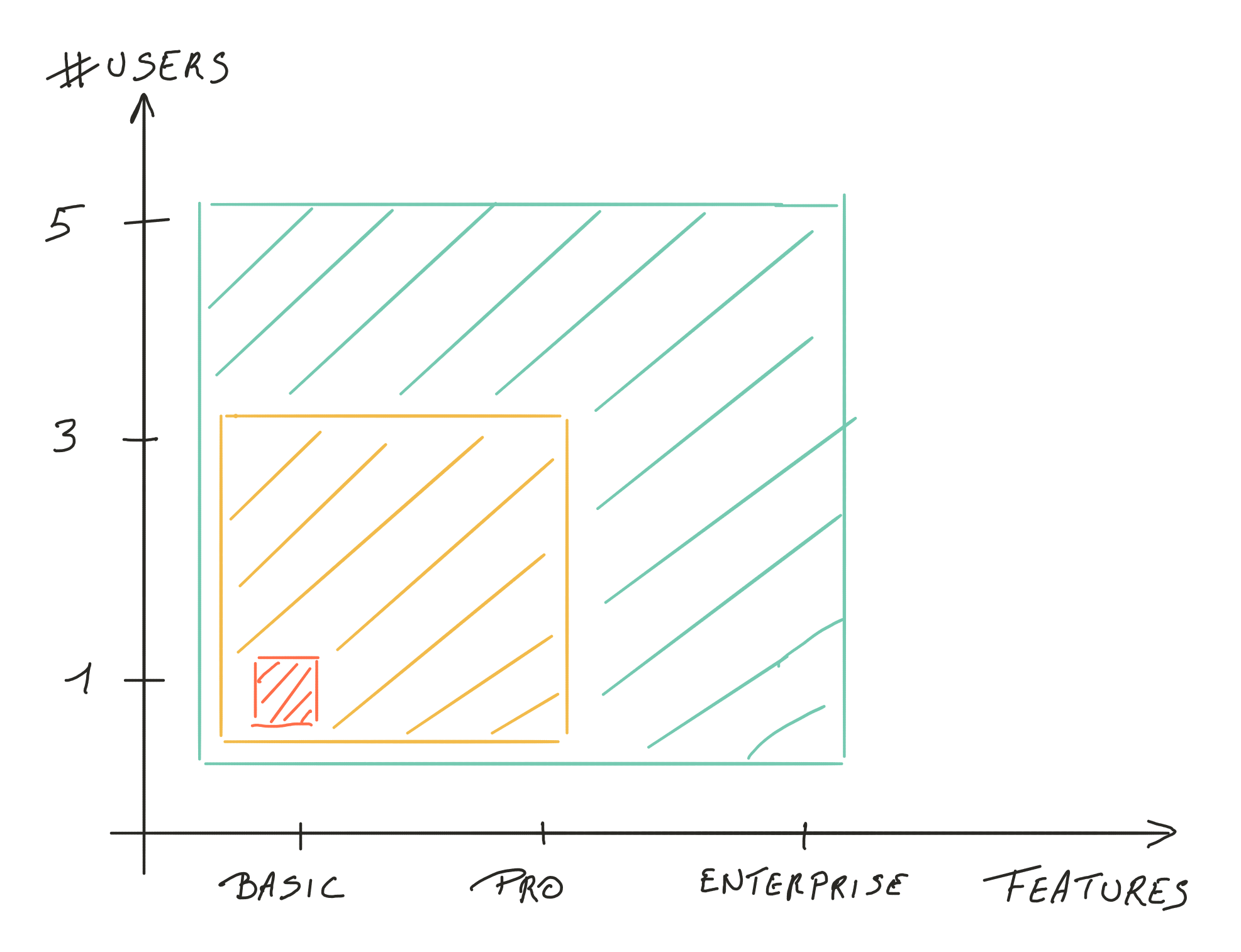 And if you add more criteria, you get a or 3 (or higher) dimensional pricing scheme: 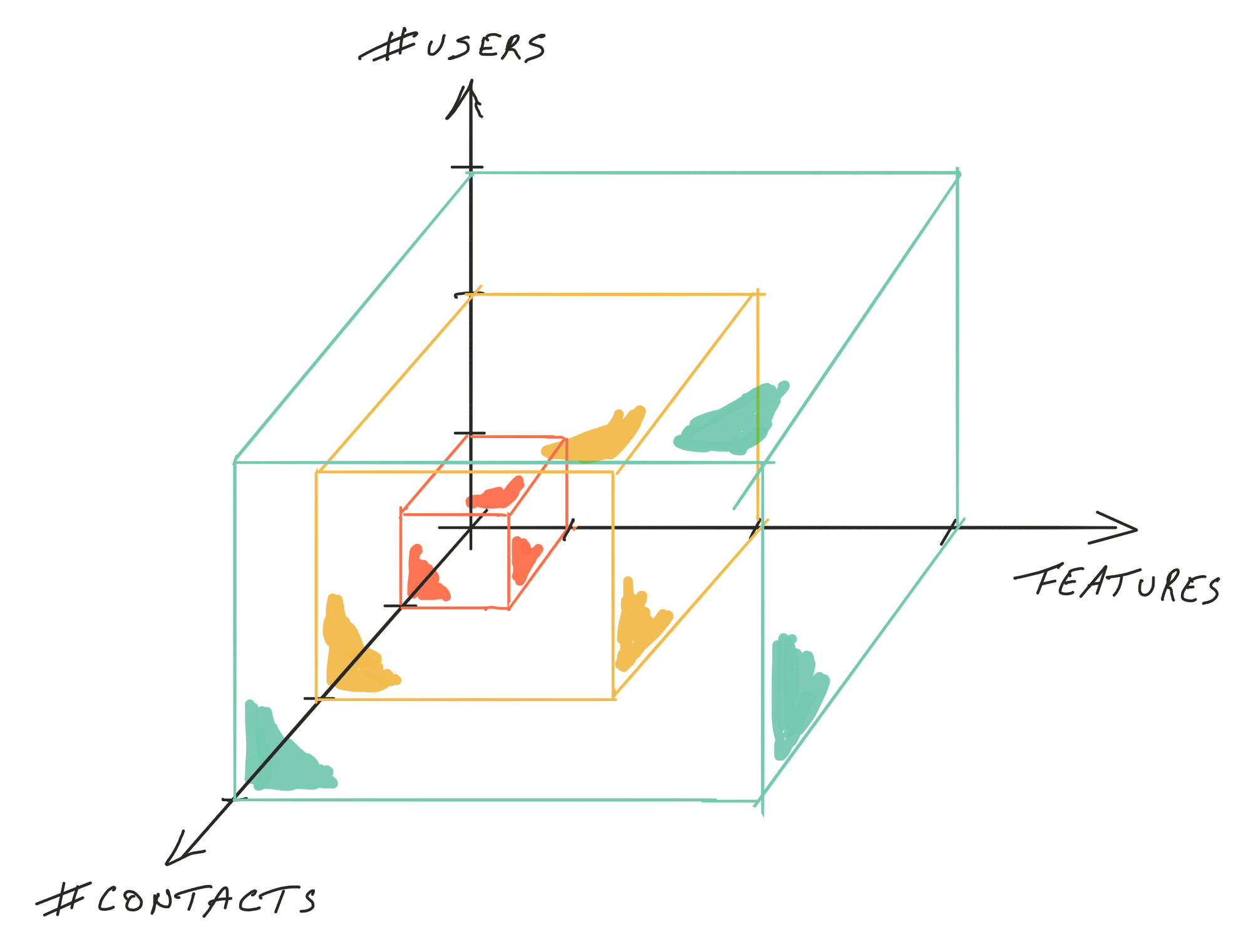 There are many examples of multi-dimensional pricing. The first example is Wix: a popular web site building tool.

They use the dimensions: 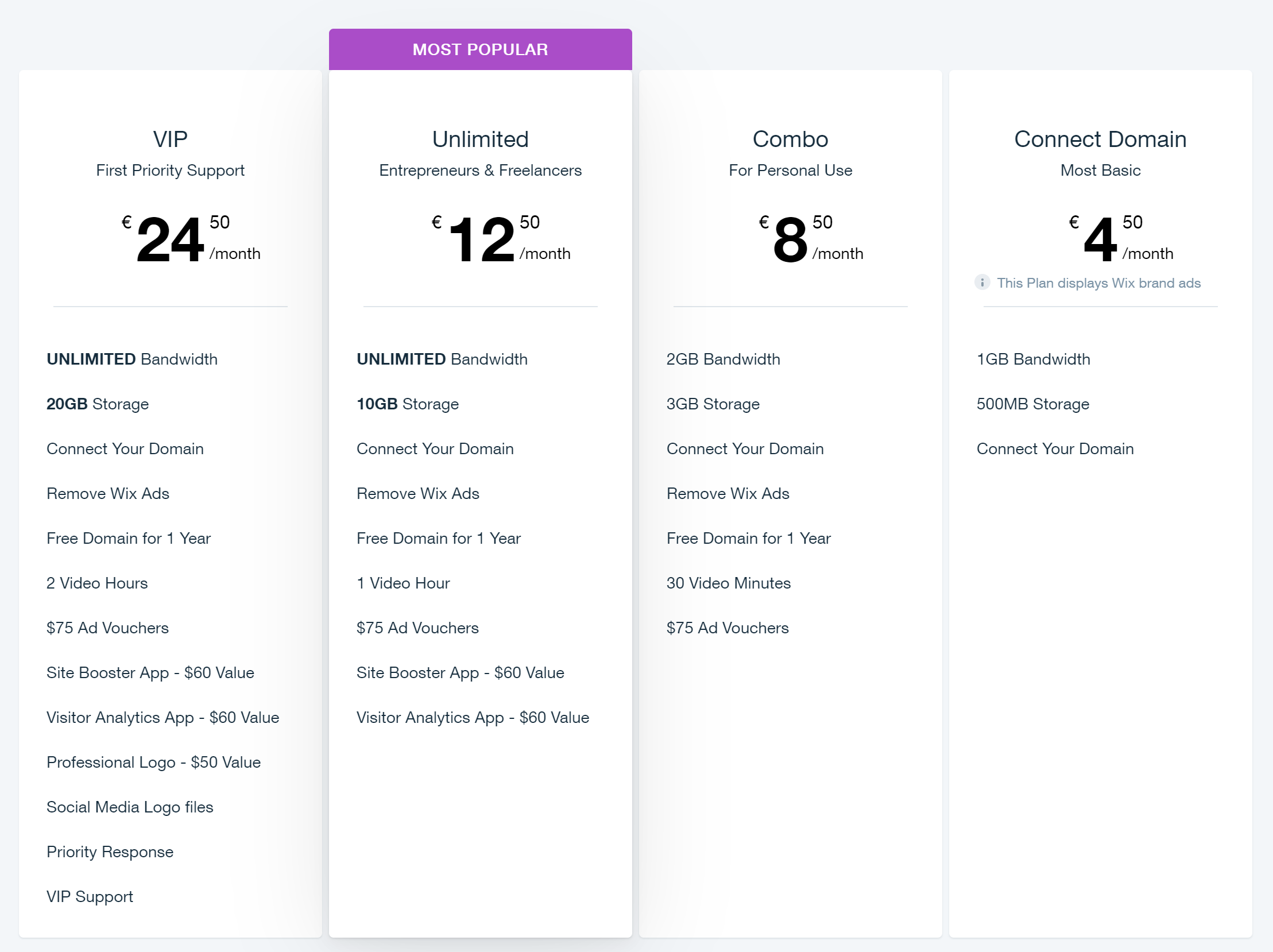 In a discrete pricing model you let your customers choose from a set of predefined packages.

Whereas in a continuous or sliding model, your users can configure their own selections on 1 or more of the price axes.

They could for instance:

An example is hubspot where you start from a plan (Starter, Professional, Enterprise), but from there you can configure the number of contacts and some additional features: 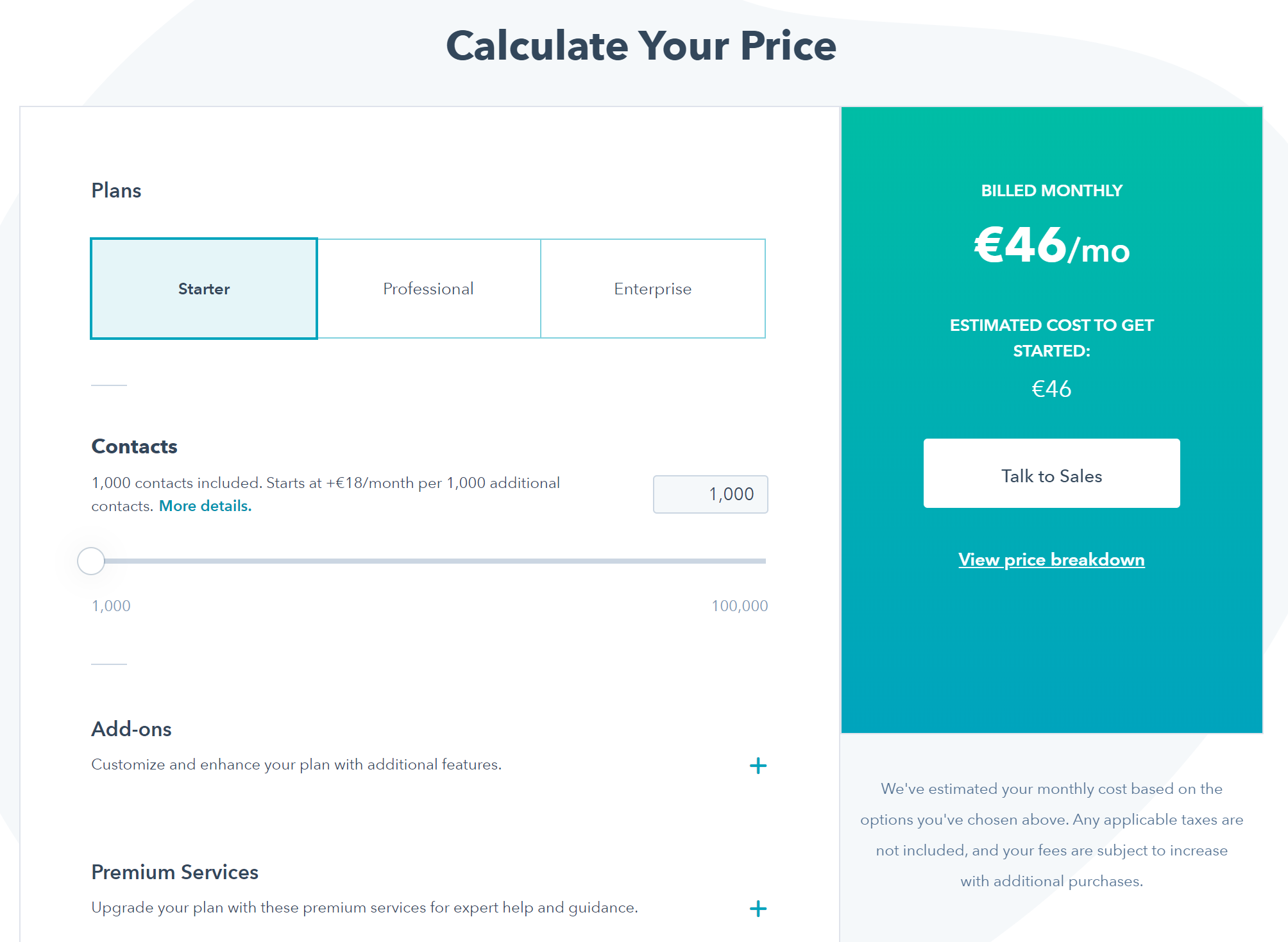 For me there is only 1 pricing model worth looking at and this is the tiered pricing model. All the others models are derivative plans or some kind of sub-plans.

In the tiered pricing model you bundle feature sets into predefined packages (called plans or tiers). Typically you see some plans that follow the structure:

The SaaS industry average number of packages is 3,5.

Basically, you recognize that not all users have the same needs and don’t want to pay the same price. Each type of user can select the plan that best suits their needs. It’s the de facto pricing model used by most companies.

As previously discussed: every plan can make some selections on each of your price axes: features, users, number of …

In many other publications about SaaS pricing you see them all as separate pricing models:

I like to see all these models as building blocks of your tiered pricing model. Because most of the time you see a combination of these ‘models’ used as part of a tiered pricing strategy.

Flat rate pricing is just a border case of the tiered pricing model, you just have 1 tier. So 1 price for all our customers, take it or leave it!

It’s not very often used by SaaS platforms, but it’s more popular by App Store apps. This can be one of the mobile app stores (such as the Apple App Store or Google Play Store) or inside an “plugin” app store of an existing platform (WordPress, Shopify).

Here’s an example of a Shopify plugin with a flat price of $6.99/month: 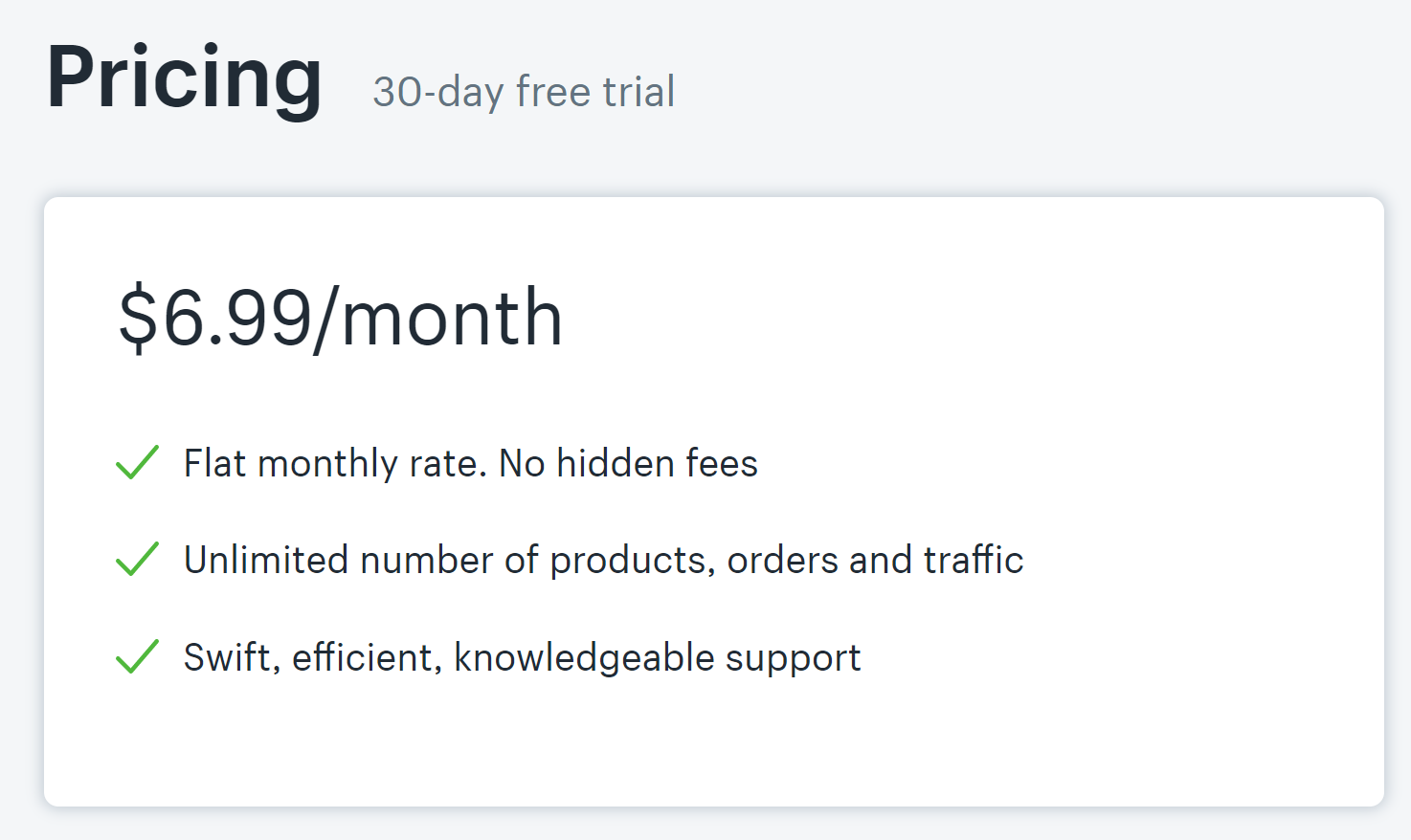 Is it a good pricing model? It’s easy to understand, but you probably miss out on a lot of customers:

It’s a good model for starting SaaS platforms or for very basic products (such as plug-ins).

In a freemium pricing model, you are offering a free service, supplemented by additional paid packages. The free product should offer enough value so that potential customers can start using it. On the other hand it should have some essential missing value so that the free users have an incentive to upgrade to one 1 of your paid packages. 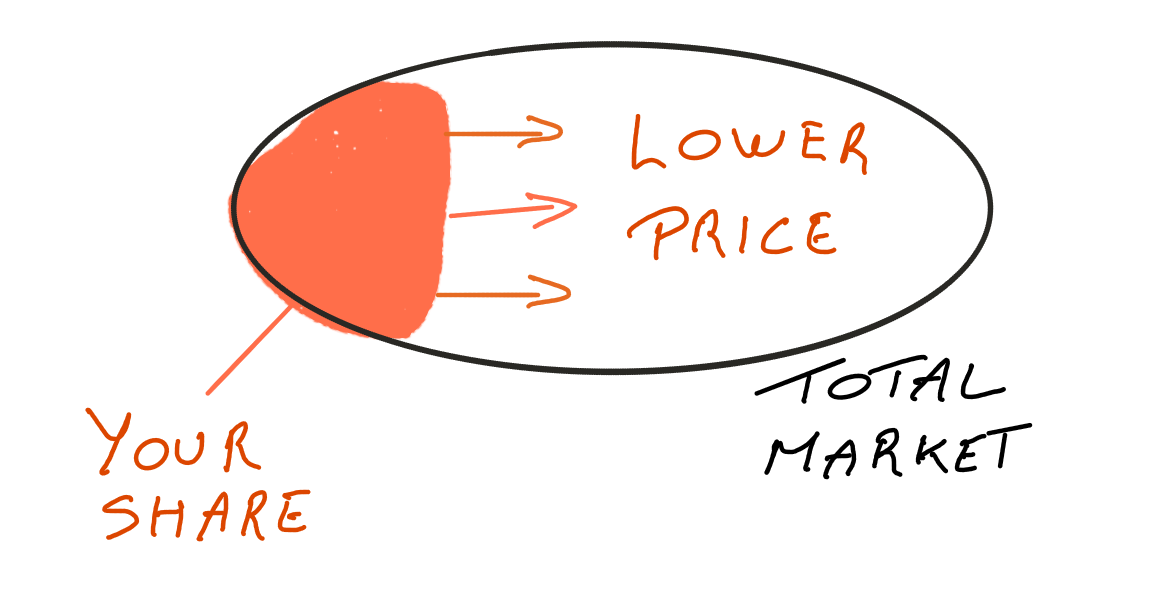 The goal of a price penetration strategy is to entice customers to try a new service with the hope of keeping the new customers once prices rise back to normal levels.

News websites are a good example: you can try the news service for a (few) months for a very low price and they hope you will convert later to a full paying customer.

Penetration pricing comes with the risk that new customers may use your service initially, but once prices increase, switch to a competitor. 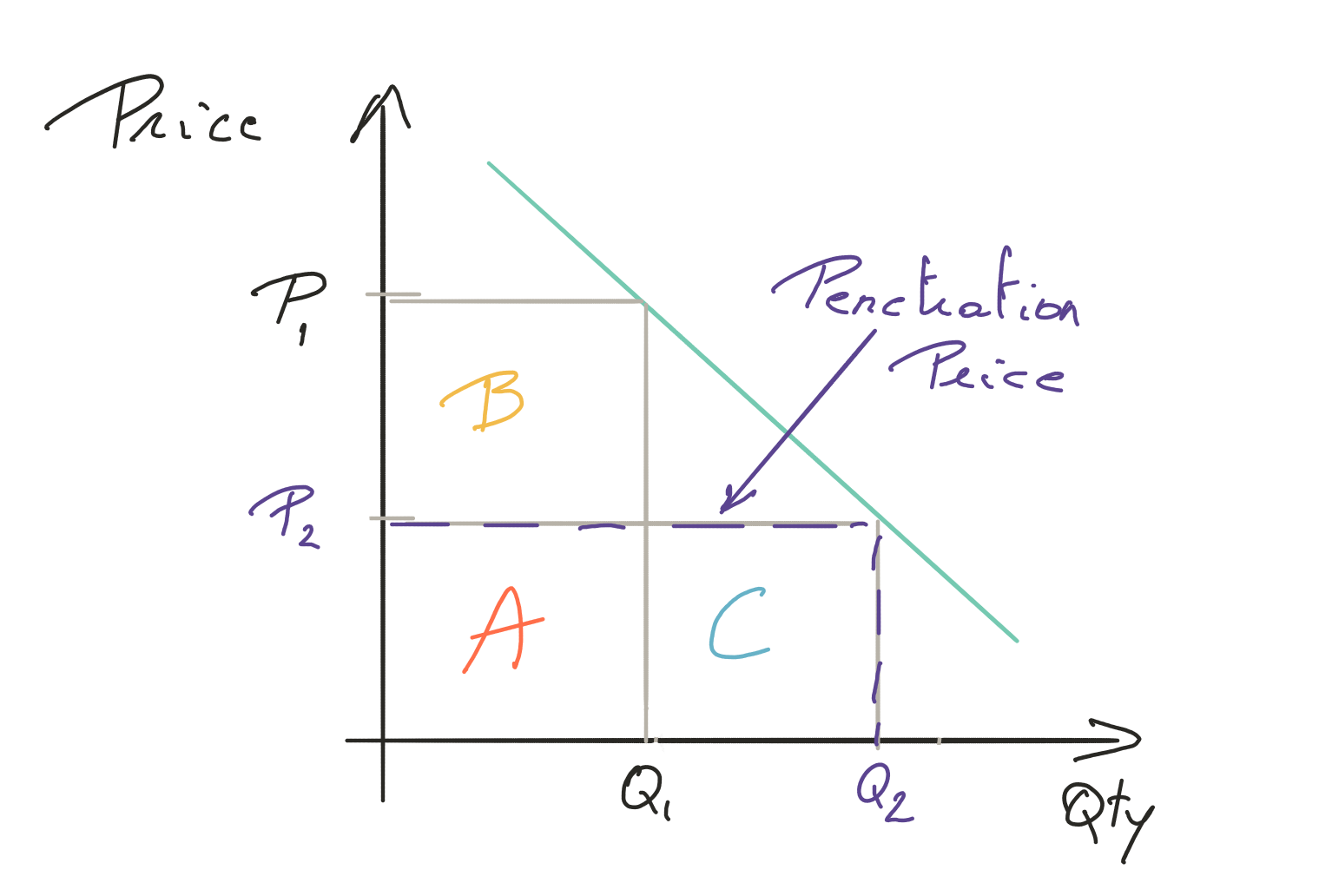 If you’re charging at a lower price (P2 = Penetration Price) in order to gain more traction (sell more licences = Q2), then you have a higher quantity based revenue (C) and you’re losing on a price related revenue (B).

Skimming pricing is the opposite of penetration pricing and is the strategy of setting a high initial price before slowly lowering the price over time. 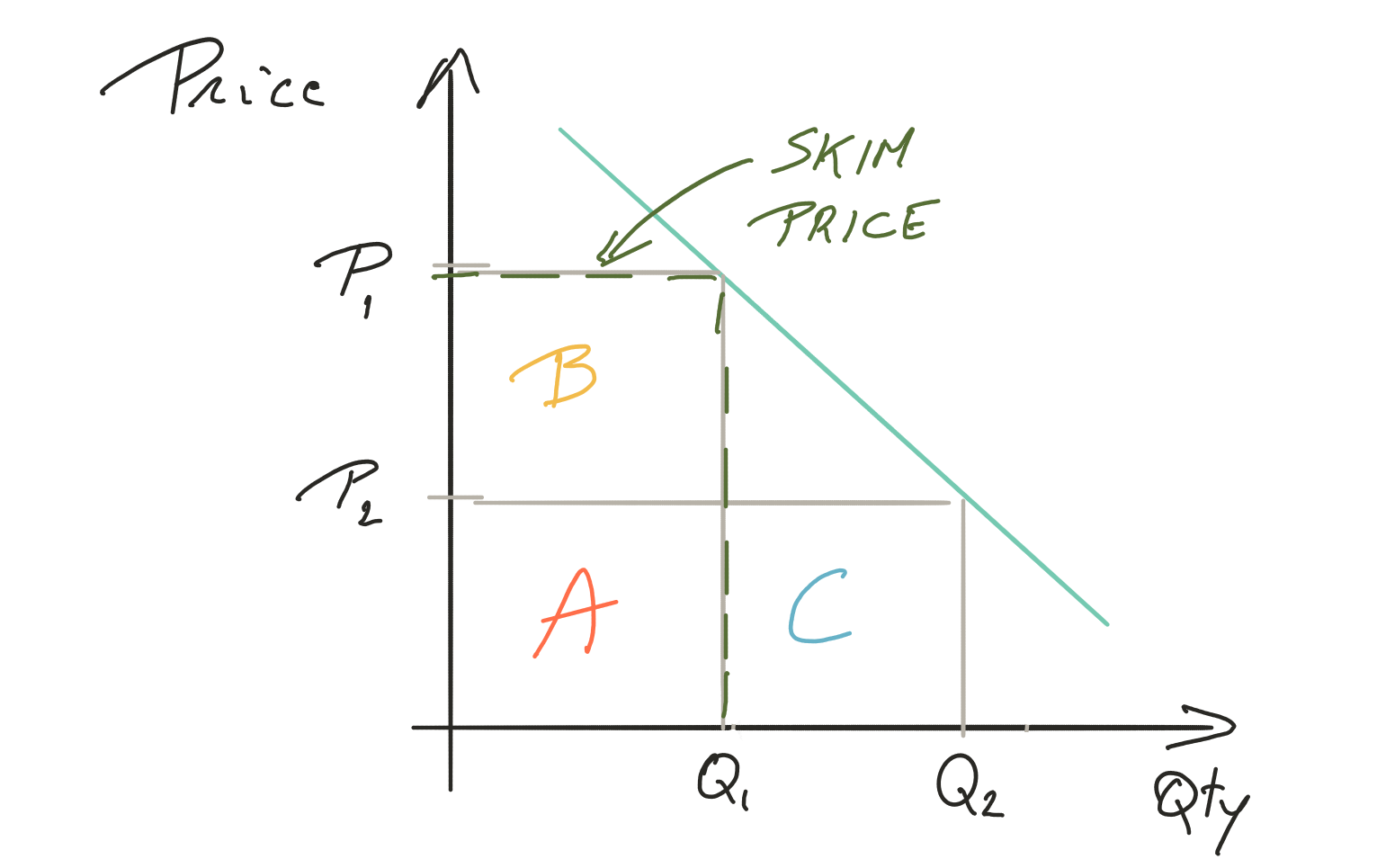 You can see this strategy at work with luxury brands introducing new products: think Apple or other tech companies introducing their next flagship device. But this strategy works as well for SaaS companies because of the technology adoption lifecycle. Early adopters are often willing to pay more for new services.

In the next graph you see the 2 pricing strategies in action: 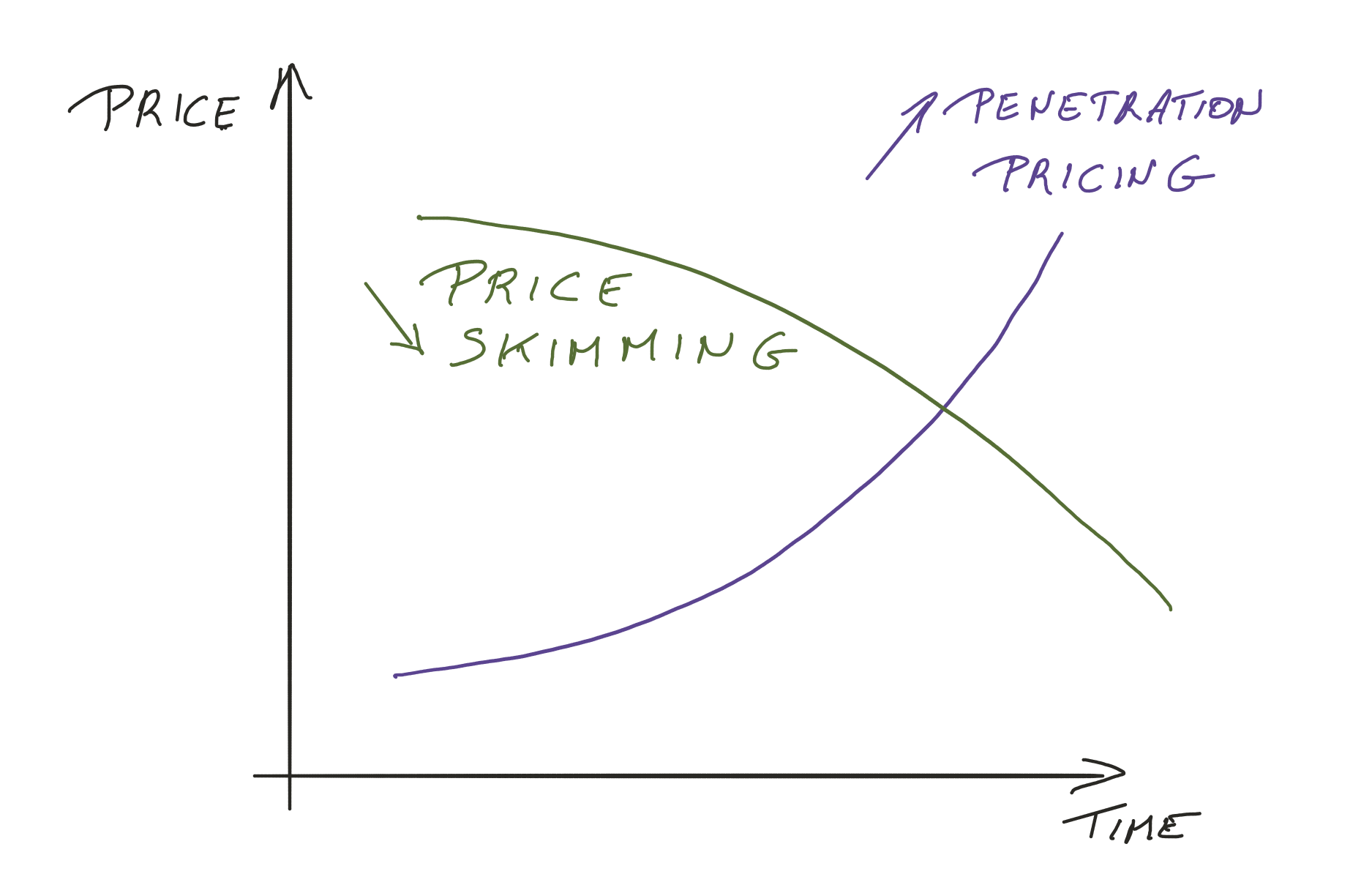 Pricing SaaS products is really at the hart of your business. It’s not the most sexy topic, but it really is very important, as such that the survival of your company can depend on it.